News  :  The Adoration of Captain Shit

The Adoration of Captain Shit

A short excerpt from my article on Chris Ofili’s early work for ARC Magazine. Read the full article here: http://arcthemagazine.com/arc/2012/08/fav-presents-the-adoration-of-captain-shit/ 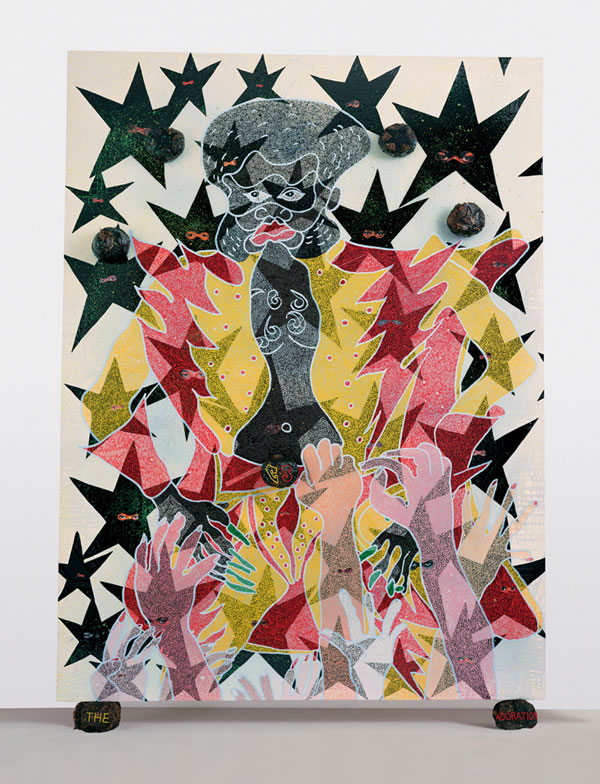 It was December 1998 and Chris Ofili had just won the Turner Prize for his exuberant, elephant dung embellished canvases. I was in the middle of my MA at Goldsmiths College and was both fascinated with and made uncomfortable by Ofili’s work. The press covering the Prize reduced his paintings to what I found most problematic in Ofili’s work, focussing on the titillating novelty of elephant dung and on the artist’s racial and ethnic character. In addition Ofili seemed to court this type of coverage, and the work, I had to admit, invited it. Paintings such as the Adoration of Captain Shit represented the black male as a flat, sexually potent comic book character. Nevertheless my interest in Ofili refused to wane and if anything increased. The lush seductive surfaces, the painting’s multi-layered complexity and the in your face images all held my attention. In the end the very problems I had with the work seemed to point to long felt contradictions in the signification and self-representation of black culture. Captain Shit had something to say.

Black artists in Britain at that time faced the usual dilemma. Work that touched on just about any aspect of our lived experience was dismissed as dealing with ‘black issues’, or, as the euphemism still has it, ‘identity’. Work that didn’t was seen as derivative of our white peers. The context for our work was completely determined by our racial character, and to insist that the work be viewed on its own merits was doomed to failure.

Ofili’s embrace of the most obvious stereotypes of blackness initially struck me as perverse. The visibility politics I grew up on dictated that what was needed was to broaden the understanding of what it means to be black…

Read the full article at arcthemagazine.com.