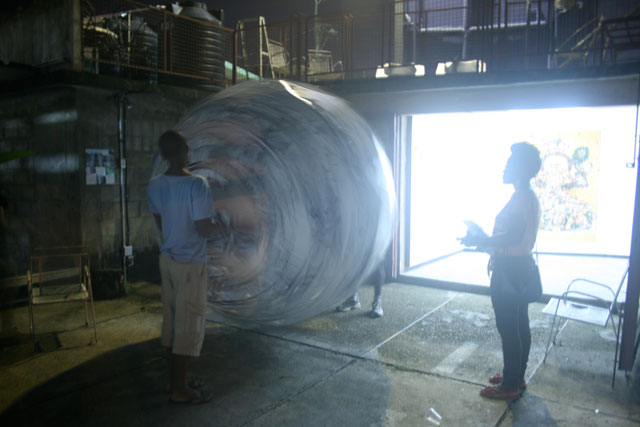 A few years ago I had an interesting set of correspondences with an art school friend currently living in LA. Over the course of the emails I tried to articulate my excitement about the current contemporary arts scene in the Caribbean. She was concerned that my work was being ghettoized. My contention was that work has to be from somewhere. Artists don’t have a problem declaring themselves as from New York or LA. Why shouldn’t it be the same for the Caribbean? Her point seemed to be that putting my work in that context relegated it to ‘outsider’ status, not on par with other contemporary practices.

I realize now that to a certain extent we were speaking at cross-purposes. While we were engaged in a discussion about space and place, a discussion about time might have been more fruitful. The difference between Kingston and New York or Port of Spain and London is less about the distance between centre and periphery and more about the legitimacy of their claim to the present and by extension, the future.

In Timed Out, art and the transnational Caribbean, Leon Wainwright articulates how art from the Caribbean is often seen as belated, and out of step with the contemporary world. The reception of our work is related to a narrative that sees our societies as in an earlier stage of development. Critics are in fact happiest when the work we do conforms to this preconception.

Others have done a much better critique of the ties between spacial conceptions of outsiderness and temporal conceptions than I’m can, but what interests me here is how the concept of time is embedded in much of the contemporary art coming out of the Caribbean. What claims are we making to the past, present and future?

One of the ways of understanding what makes the work of artists like Ebony Patterson and Sheena Rose so vital is by looking through this lens. In Ebony’s case she exaggerates the aesthetics of dancehall space in a way that propels the culture of Kingston’s underclass to the centre of ‘now’. By stating dancehall space as a place of   contemporanity she questions who can legitimately claim the present and undermines the stability of class and racial boundaries.

Sheena Rose’s videos and drawings of her every day adventures also validate the space of the Caribbean in the here and now. Daily experiences in South Africa, Barbados or the United States are put on the same plane, with no apparent gradient between developed or underdeveloped, contemporary of backwards.

Time is also something I’ve been thinking about in relation to my own work. The Actor Boy project and to some extent the Transporter project are concerned with conflating notions of past and present and manifesting how different ideas of the future coexist in the same space. And if the future is a multiple instead of a singular entity the argument that work from a particular region is anachronistic looses its force. What future can we claim?

As artists from the region and its Diaspora we are forever navigating worlds with different notions of past, present and future. At home our history is contested, our present in crisis and our future seen as elsewhere. Abroad we can see our past as the future as the forces of globalization increasingly turn workers in to serfs and slaves. Complicating this is the way contemporary art is received within the region. In truth it’s often us who call the art worlds we exist in behind the times. We want to move then into more ‘current’ ways of thinking. The same can be said for the often racist or ethnocentric pigeonholing we constantly contend with when our work travels. Nevertheless it’s our ability to move across both time and space that gives us our greatest strength. Perhaps we are the future no one wants to see.