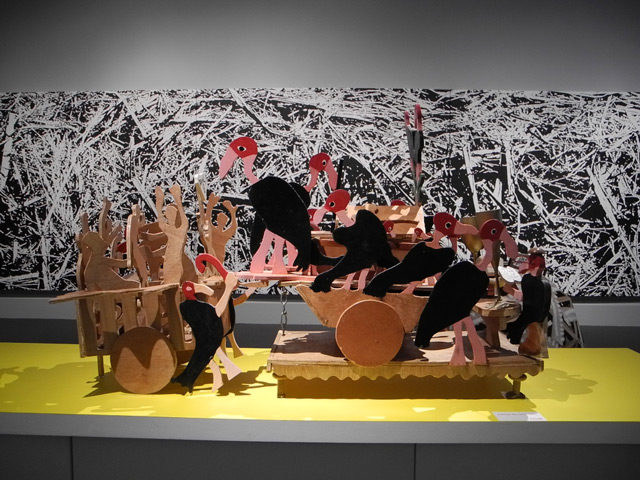 R.M. Vaughan from Globe and Mail reviews the exhibition ’Contemporary Jamaican Art: Circa 1962/Circa 2012′, which is on view at the Art Gallery of Mississauga through September 8th:

I used to read the comments that follow online newspaper articles and talk-radio forums. It was perverse but addictive entertainment.

Now, however, after the recent spate of shootings in Toronto, and Mayor Ford’s thoughts about “immigrants” and crime, I have been cured of my addiction. Cured by the tidal wave of racist anti-Caribbean commentary people have gleefully posted online, for all the whole world to see, as if proud of themselves.

Folks, all communities have criminals. Yours and mine too.

But what else do all communities have? Artists.

I don’t pretend that art can cure anything, nor does it necessarily try or desire to. But the outburst of inter-cultural misapprehension faces a strong (and often very beautiful) counter-argument in Contemporary Jamaican Art: Circa 1962/Circa 2012, at the Art Gallery of Mississauga.

To be clear, I do not want to position this fine exhibition as some kind of outreach program – indeed, the show, part of the 2012 celebrations of Jamaica’s 50 years of independence, has been in the works for more than a year – nor, especially, do I want to localize the current disquiet in any one, or any one hundred, particular diasporas. Or to localize it at all. I’m not a cop.

But, rather, I offer that, given recent events and the unfortunate subsequent climate of maligning and finger-pointing that pervades, a good way to fight the knee-jerk inclination to narrowly define a community (any community) is to explore the multiplicity and splendour of said community’s art.

I would offer the same recipe if the minority I belong to suddenly found itself under unfair scrutiny. Art takes the one-dimensional and makes it kaleidoscopic.

Tidily curated by the National Gallery of Jamaica’s Veerle Poupeye, Circa 1962/Circa 2012 unfolds in a straightforward but effective fashion. In the gallery’s long opening hallway, works (primarily paintings) from the decade surrounding the year of independence are (more or less) chronologically arrayed. In the gallery’s larger main space, works made on or near the year 2012 are displayed.

Essentially, one “walks” the island’s art history – granted, it’s a far from complete history, but still a thoughtful survey. What will strike the viewer first is the abrupt shift in tone and style between the works found in the hallway and those in the main space.

The works made around the time of independence look outward for inspiration – to American mid-century abstraction, to the social realist painting movements of the 1930s, to Constructivist murals, to West African sculptural styles, pre- and post-colonial, to Impressionism and mannered post-Expressionism.

They are no less accomplished or lovely because of their obvious external influences, but, like Canadian art in the first half of the last century, these works appear to have been made under the perception that the “centre,” which is both an aspirational space and a burden to the colonized, is forever elsewhere, never where one actually lives.

Conversely, the works in the main space, a generous selection of everything from video projections to digitally-manipulated photographs to machined sculptures to massive installations, reach outward, and are made with full confidence in their particular and shared importance in the international art stream. The jolt is stunning, akin to stepping, for comparison, from a room full of sweet old Krieghoffs into a mixed-media conflagration by art star Shary Boyle.

Furthermore, the contemporary works present not one Jamaica, but many Jamaicas; they acknowledge and celebrate the nation’s pluralities, and thrive because of them. Jamaica, the main space proudly heralds, is fast becoming an art world powerhouse, one that looks first to please itself.

It’s hard to pick favourites in a show that is arguably more about the big picture than individual works, but here’s a go.

Be sure to find Eugene Hyde’s 1959 etching of an abstracted figure carrying a bundle of produce, a work as ethereal, in its own down-to-earth way, as a William Blake etching. Osmond Watson’s 1968 oil on canvas of a busy city corner throbs with weird deep sea greens and icy blues, and is both dreamlike and social-realist-blunt in its depiction of bustle, commerce and noise.

Mallica “Kapo” Reynold’s painting of a crowd of dead people ascending to heaven is deeply strange, primarily because only two of the blessed are visible in profile. As for the rest, we can see only the backs of their ovate heads, heads bundled up like newborns swaddled in pastel blankets.

In the contemporary collection, wonder at Charles Campbell’s massive printed paper sculptures, balls of interlocking card held together with bulldog clips. Equally steady-handed is Petrona Morrison’s video and text installation exploring the media coverage of a police raid. At the work’s centre plays a looped video of a young, shirtless black man extending his arms, in either defiance or surrender, or neither. The man’s body anchors the near-hysterical coverage with a shock of real, and too easily destroyed, flesh.

And don’t miss Toronto’s own Michael Chambers’s two conversely quiet works – a meditative photograph of a single empty chair lingering, slightly askew, in a long, highly polished hallway, and a companion piece showing a nude man, a figure of health and vigour, resting in (or resisting?) a large, gleaming wooden box. The man is masked, as if embarrassed not by his nudity, but his own beauty.

Both works ache with melancholy, and more than a little sexy mystery.

Original article found in the Globe and Mail