News  :  Failure at the Yard

Failure at the Yard

It’s almost inevitable. At some point in the process of making a new art work I start asking myself “Why the hell am I doing this?” At Alice Yard this point came some time during my third consecutive fourteen hour day of cutting coroplast sheets for the work that was to become Night Object (Dessalines SOE Transporter). My wrist hurt, neck and back were sore and my eyes were starting to lose focus. I had a growing pile of used utility blades beside me and the stack of white and blue triangles seemed never-ending. But it wasn’t the strain of the monotonous task that was the problem. The tedium of a labour intensive practice can be strangely addictive. The difficulty was that I just wasn’t sure it would work when I put it all together. 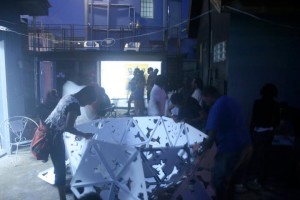 Such moments of doubt aren’t uncommon. Every project begins its life in the unknown and the process of extracting something tangible out of that murky world is fraught with uncertainty. At times every step along the path seems to be a potential pitfall and my mind invents ever more ways that the project could fail; technically, aesthetically, conceptually… what if the whole endeavour just isn’t worthwhile to begin with? Finding my way forward through the obstacles my monkey mind is ever putting in my way is both the most challenging and rewarding part of the work. And I would like to say that it always works out in the end. That the journey always leads to a desirable destination. But it doesn’t. Some of the projects that I put the largest effort into never bear fruit. Failure marches in step beside me pretty much the entire way. 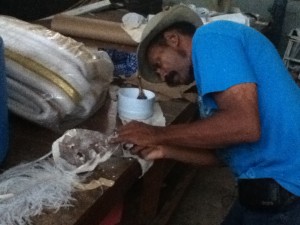 I have a difficult relationship with failure. Staying too firmly within my comfort zone has always felt like death, a world of diminishing possibilities that’s completely at odds with the drive to create. But the fear of failure is also a regular presence in my studio. At times it’s a productive force, something that gets me to push past problems instead of giving up. At others it shuts me off from the rest of the world. My strategy is simply to try to keep my failures private. No one has to see the storage racks in my studio filled with half completed canvases, false starts and unsuccessful projects. The process is important, but the results don’t always lead to something I’m willing to put up for public scrutiny. 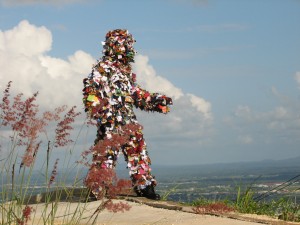 Working with Dhiradj Ramsamoedj on his Flexible Man project

So it might seem strange to say that the real opportunity that Alice Yard offered me was the chance to fail publicly. And that this experience had a larger impact on my practice than many of my ‘successes’ over the past years. To fail publicly is uncomfortable, but it’s also liberating.

Alice Yard is an interesting model for a residency. To say that it doesn’t have the bells and whistles of most residencies in North America is an understatement. It really has very little of what would normally be considered essential for most studios. You won’t find an easel or drawing board, an editing suite or tools for making, well anything. There is no technician to help you get things done or studio down the hall to run to when you’re looking for a spare x-acto blade. Instead of a closed studio and access to equipment you get an open courtyard and access to people. 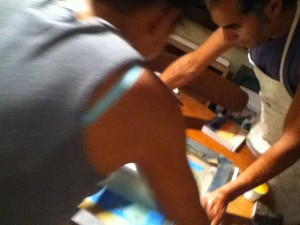 The Yard replaces the infrastructure that we usually rely on with an extended and informal network of artists, designers, businesses, mas-men and musicians. The way this changes how one goes about making work is profound. It means that anything you do is in negotiation with others and everything you create is an exchange. The network becomes your studio, your support, your sounding board and your audience.

Informal open networks are one thing we do well in the Caribbean. While the impoverished state of our infrastructure, suffocating hierarchies of our institutions and Byzantine structure of our bureaucracies conspire to frustrate us it’s the informal networks that we turn to when we need to get things done. They are more resilient and efficient and the bonds of trust and responsibility that they create humanize us. They demand we share not only our talents but also our vulnerability.

Taking Night Object out on the road.

As I’ve said, doubt and uncertainty go hand in hand with making art. There is little else that leaves me feeling so exposed, and I’m pretty careful about who I invite into my studio and when. Sometimes that inkling of an idea is just too fragile to be pushed out into the world. For this reason my studio practice in Canada is largely self-reliant. But this self-reliance has some serious limitations and there is something to be said for navigating uncertain territory with some near strangers who’ve come to help. 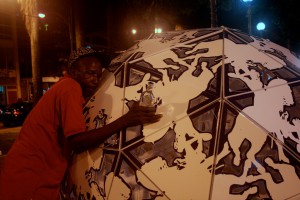 Passer by gets friendly with the Night Object

The three weeks at Alice Yard were both fruitful and challenging. The recently declared State of Emergency brought with it an 11pm curfew and heightened social tensions, robbing people of time and putting them on edge. In this climate the generosity of everyone’s support for my project was even more apparent. And I had to open the metaphoric doors of my studio, exposing little wisps of ideas to the productive forces around me. Decisions were made quickly and when I didn’t have the answer someone else would step in. All the while failure marched, danced and played beside me. 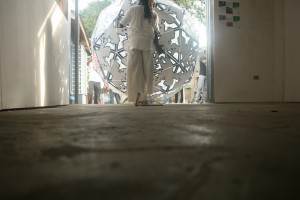 And the project both failed and succeeded. A response to the State of Emergency, Night Object (Dessalines SOE Transporter), was a seven foot high geodesic sphere that we erected in public spaces around Trinidad. Carrying intersecting images of the Hatian Revolutionary leader Jean Jacques Dessalines atop his horse the Night Object was a kind of time travelling link between despots, freedom fighters and Utopia. During its outings in Port of Spain it immediately attracted attention and public interaction. Children begged me to take their picture in front of it. Couples posed with it. One man danced with it and then gave it a drunken embrace. It was an object around which the culture performed itself, an inscrutable alien attractor. 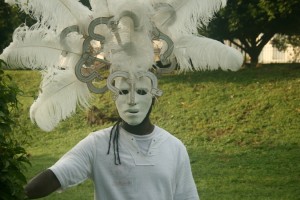 Sean takes over as Actor Boy

But it also had problems. Corrugated plastic proved the wrong material and the sphere was always on the verge of collapse. As a political intervention intended to contest the curtailment of peoples right to assembly it was ineffectual. The image of Dessalines was unreadable and obtuse. The other half of the project, the development of Actor Boy, a performative persona referencing a character from Jamaica’s Jonkonnu festival, was more problematic. A new costume for Actor Boy that I worked on with the help of Robert Young still sits on my shelf half completed. Actor Boy’s one public outing in Trinidad where he ventured to a leafy tropical park and wandered about at a distance from the Dessalines SOE Transporter really just highlighted his unresolved relationship to both the rest of the project and the public. 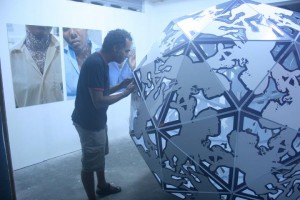 Ultimately the categories of success and failure don’t make a lot of sense in the context of Alice Yard. The Yard sees itself as a generator of ideas and relationships, a networked space that helps make things happen, sometimes there, sometimes elsewhere. The unresolved aspects of a project are just ideas in the forming. It’s the bonds that are made with Trinidad’s Creative community and other artists that are important. The Yard for me was really about a different way of working, one that opens up the studio doors more often and is less concerned when others see the doubt and unknowing that I contend with daily. 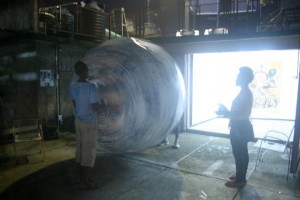 Playing with the ball

Beyond its impact on my art practice the Yard’s approach to making art is one that fosters the development of a Caribbean art community. It’s embrace of collaboration, risk taking and even failure is a way to share knowledge and skills and build the trusting relationships that are necessary for the regions art to grow and become stronger.

A big thanks to everyone who made the project possible, especially Chris, Sean and Nicholas from Alice Yard, Suzanne Nunez, Robert Young, Jamie Lee Loy, Larry Richardson, Sheena Rose, Mario Lewis and the students from UWI & UTT.