I am always sucked in by art’s beauty. But it isn’t necessarily an empty seduction, particularly if an artwork’s beauty is transformative, introducing an insight, or forcing me to adjust my attitudes and beliefs or confront my carefully nurtured ignorance. Charles Campbell’s Transporter deploys beauty to tear open seamless historical narratives. He irritates partially skinned-over political wounds, pulls injustices from the past, reminding, on gorgeously surfaced works of art. The objects he created for Transporter are calibrated with incisive precision We confront a hard and enduring conundrum. 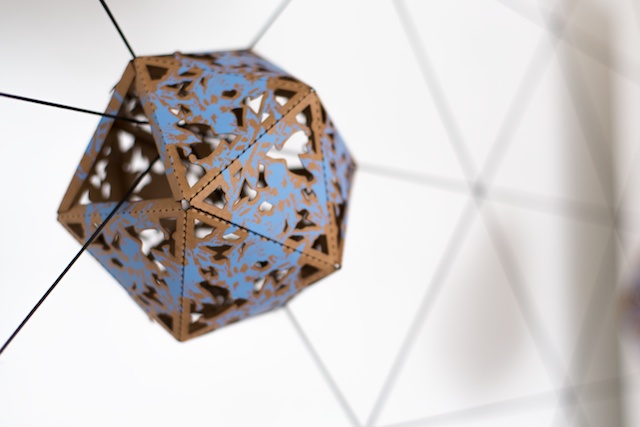 As essayists Toby Lawrence and Kevin Rodgers eloquently articulate in this book, Transporter splices together models of Buckminster Fuller’s utopian architecture with abstracted images of the slave trade, which founded the economies of North America. Campbell is interested in the interplay between “heavily loaded political narratives and utopian ideals, painting and sculpture, public and private spaces”. This body of work is based in the economic and political histories of the Caribbean—territories and people colonized for resource agriculture—the same economic pillars substantiated Canadian colonialism as well. For most of us in BC, another resource-based economy, Campbell’s big triptych, Bagasse, the instigating image for the Transporter series, bears a disconcertingly strong resemblance to forestry industry clearcuts. Campbell refracts the troubling icons of the slave trade, forced migration, and the collateral tools of abusive economics into politically charged camouflage patterns. His patterns over- paint a series of downscaled geodesic spheres, a modernist form he repurposes—symbolically and politically—in ephemeral unbleached cardstock, hand cut in a process that can only be described as a one-artist sweatshop. Campbell’s camouflage patterns, positioned as surface rather than obscured or hidden, cannily pinpoint political and ideological scotomas: historical blind spots obscure the unsavoury foundations of our comfortable North American culture. Though Campbell’s work refers to histories of migration and colonial exploitation, it is impossible not to draw comparisons to the immediacies of the current corporatization of our culture, economies, and lives. 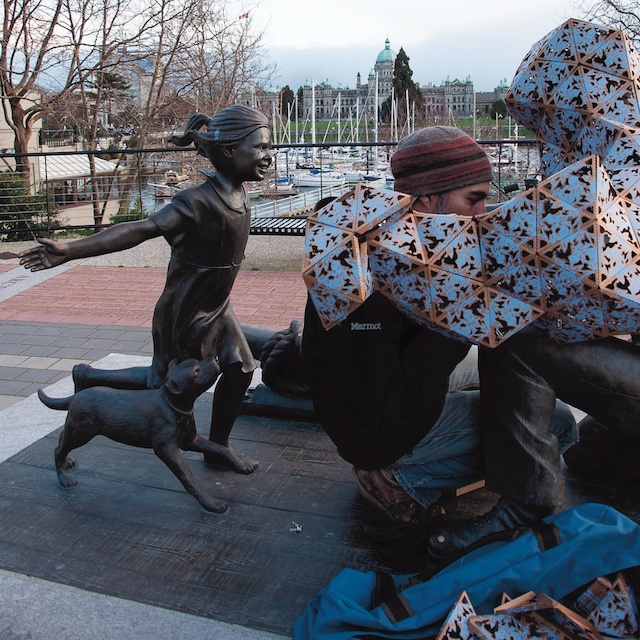 During his residency at Open Space, Campbell embarked on another research path, straying from the symmetries of his geodesic paintings to venture into unexpected fugitive amalgamations attached to architecture and furnishings. In his Open Space studio, he clamped these fractal-like geometric forms to a framed grid of taut black cord. On the one hand, the cord refers to the grids traditionally traced over a prepared surface to facilitate the rendering of large-scale murals and history paintings. But the elastic cord carries a hint of menace: it resembles snares, nets, and entrapment accoutrements. His constructions display Campbell’s characteristically lush silkscreened surfaces yet are strange, anonymous, and mildly disturbing. During the last weeks of his residency at Open Space, Campbell situated his new 3D constructions in unannounced sites in Victoria. One of these was a purpose-built cloak for The Homecoming, a naval memorial exploiting the visual trope of the returning soldier, prominently located in a busy tourism area on Wharf Street. Rather than obscuring the intent of sculptor Nathan Scott’s commissioned public monument, Campbell’s intervention conferred a brief moment of potent criticality. Campbell covered the head, shoulder, and arm of the male figure with his triangulated platelets—armouring The Homecoming in cardstock, in paper. What more potent ideological armour than the historiography of power? The Homecoming’s figures are Caucasian, the warrior is a male in casual uniform, reaching to embrace a tiny girl. While Scott successfully met the conditions of his commission’s objectives by creating a memorial that reinforces historical mythologies necessary to marketable warfare, Campbell’s intervention reinstated the monument’s central figure as an anonymous warrior—a warrior who returns from the trauma and randomness of technologized warfare as something else, “a witness to our blind- ness, and therefore a sort of monster perhaps”. Inevitably, Campbell’s warrior cloak was short-lived, ripped down within hours. Campbell continued this program of non-commissioned public art in Kingston, ON, where Transporter was presented this spring Campbell activated the streets of Victoria and Kingston, retelling erased histories in public causeways and alcoves, reasserting the commons as arenas of discourse.

During the past year, Open Space has hosted two production and presentation residencies. The residencies meet one of our major objectives to “explore the role and status of professional contemporary artist in all disciplines”. Allocating part of Open Space to a studio opens multiple interpretive pathways. A visiting artist in residence is available to colleagues and to the community in ways that a simple fly-in for the opening and installation simply cannot deliver Campbell’s residency is a bit different. We knew that Transporter was previously exhibited at the Jameson Gallery, Duke University, in 2011. When Open Space’s Program Committee reviewed Campbell’s proposal, it generated unanimous enthusiasm. We invited Campbell, a local artist who exhibits his work nationally and inter- nationally, to present this first major exhibition of his work in Victoria. His residency has given us all an opportunity to engage with his practice and, perhaps more significantly, to reconsider the histories, theories, and politics that feed his layered and intensive project.

Open Space thanks Charles Campbell for his willingness to contribute to our program for such a protracted period. It was wonderful having him work in the space with us. He generously shared his ideas with many visitors and visiting students. Open Space is honoured to present Transporter and the new iterations of the project. This publication documents Campbell’s project as it was presented here at Open Space and its subsequent installation at Modern Fuel in Kingston.

Many individuals and organizations have contributed to Transporter. We thank essayist Toby Lawrence for her insightful essay. At Open Space, Jacquelyn Bortolussi and Miles Giesbrecht took on the administration, installation, and photography for Transporter. Doug Jarvis contributed to the project in important ways. Sophie Pouyanne co- ordinated this publication, copy-edited it, and designed it with her mentor Lara Minja of Lime Design. We are grateful to Victoria artist Megan Dickie for her insightful public conversation with Campbell. Summer students Benjamin Willems, Regan Shrumm, Zoe McCormack, and Graham Macaulay assisted with this publication. Volunteers Elena Andrade, Jonathan Dowdall, Emily McIvor, and Mikhail Miller assisted with the off- site installations and photography. At Modern Fuel, Chris Miner photographed the installations. We are grateful to Kevin Rodgers of Modern Fuel for his afterword and for partnering with Open Space to produce this book.

Open Space acknowledges, with gratitude, the indispensible financial support of the Canada Council for the Arts, the BC Arts Council, the Community Gaming Grants of the Province of BC, the CRD, the City of Victoria, and our members and volunteers.

Helen Marzolf is an artist, educator, and curator who is currently the Executive Director of Open Space, an artist-run centre that organizes visual arts, new music, media arts, literary, and interdisciplinary projects in Victoria.